About Dogs on Campus

Celebrating its tenth anniversary this semester, the Dogs on Campus pet therapy program, founded by Kent State University professor Dr. Kathy Adamle, has been bringing happiness and snuggles to Kent State students for a decade.

Dogs on Campus is the first pet therapy program on a university campus in the country. Adamle got the idea for the program after walking her dogs around campus and seeing the positive reactions of students passing by. Adamle then wondered “why don’t we have pet therapy for people who are not sick?” Adamle wanted to bring the same philosophy of pet therapy for those who are ill to students who are well but have left their pets at home.

Eddye White, a volunteer with Dogs on Campus, has seen first hand the positive reactions of the students. White said students often talk about their own pets and frequently show pictures of them, too.

In addition to visits to campus residence halls, the Dogs on Campus volunteers are called in for stressful situations and campus emergencies. A study by Karen M. Allen, Jim Blascovich, Joe Tomaka, and Robert M. Kelsey found that the presence of dogs reduced stress levels of women.

White recalled one particular campus emergency visit that made a profound impact on her. Dogs on Campus volunteers were called to a residence hall after one of the residents committed suicide. White was in the hall with one of her therapy dogs, Jessie. The roommate of the student that committed suicide came out from her room and held Jessie. After the girl cried into Jessie for a few minutes, she looked up and inquired about the dog’s name. White proceeded to tell her the dog’s name was Jessie. The student began crying harder and stated that her roommate’s name was also Jessie. After awhile, the student calmed down and seemed to be doing better. White believes that, even if it was just for a moment, the Dogs on Campus program made an impact on that girl’s life.

Adamle stated that the visits with the therapy dogs don’t necessarily make anything better for the students, but for that moment, it gives them something to be happy about.

Dogs on Campus volunteers and their dogs are also present for depression screenings, other mental health activities, and in the library during finals week.

Many of the volunteers involved in Dogs on Campus believe the program not only benefits the students, but the therapy dogs as well.

Adamle’s feelings echoed that sentiment. Adamle stated that her third therapy dog, Bridget, has a had a difficult life but, Admale believes that this program has brought her joy.

Dogs on Campus has touched the lives of students and dogs alike. 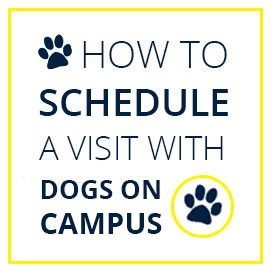